What Age should Children Learn to Assess Risks? 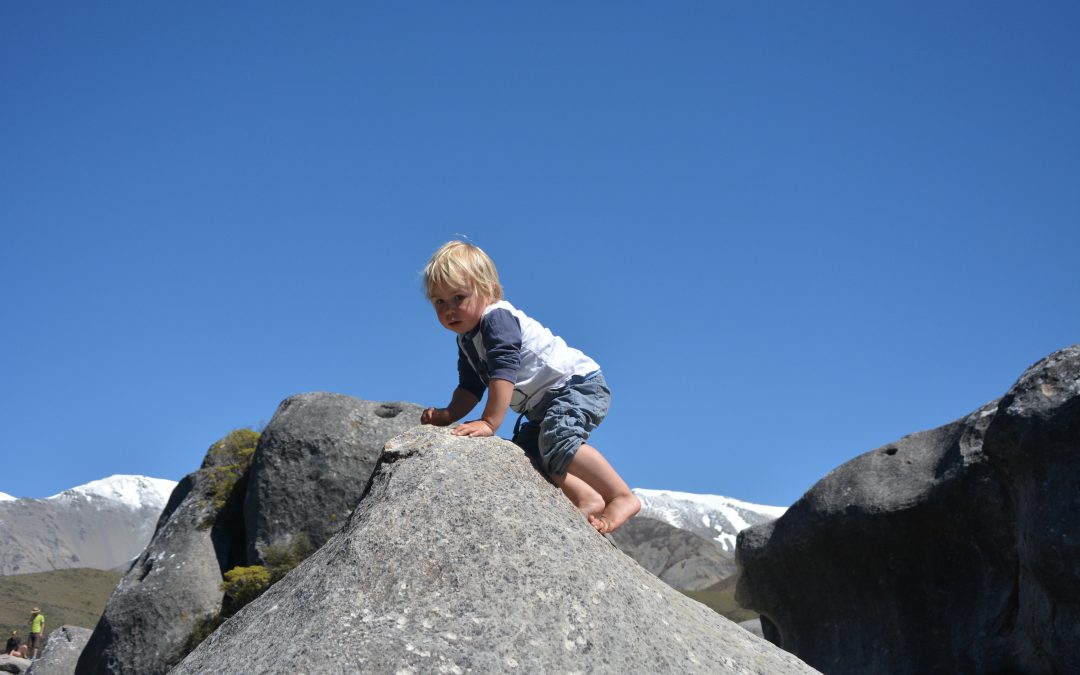 I am often that parent at the playground that has other parents gasping and running to save my children.

It happened the other day when my 3-year-old was playing with another boy at the park. They had some toy cars that they were letting go down some ramps to see how far and how fast they would go. The best place they found to do this was sitting half way up the half pipe and letting the cars speed down and slowly come to a stop.

My son eventually decided he would go around the back where the grass slope met the half pipe and he jumped up onto the top and let the car go down the front face. I was watching him from a distance and noted a couple of parents’ heads turn to see if I was near before promptly standing up and saying to my son ‘Come down from there, it’s not safe’. I yelled out politely and said ‘Its ok – he’s fine’ and they sat back down.

I kept watching as he climbed down off the back and ran around to pick up the car and then went back up to the top of the half pipe to let the car go again. He did this a few times. Then he did something different. He let the car go and instead of jumping off the back, he spun around onto his tummy, lowered his feet and then his body down the face of the half-pipe and he let go. He slid all the way to the bottom. The gasps were loud!

For me, I was proud and I was smiling walking over to him. Some people reading this might be gasping too and wondering why I was so proud. I was proud because I watched a process of risk assessment take place right in front of me. He figured out that the car would always touch the ramp even at the top where the half pipe was vertical.

He also figured out that no matter how high up the car started from, it would always roll the whole way down and eventually slow to a stop. So, when he did it himself he had already watched enough times to know that he would slide down fast to start but then he would slow down as the car had.

He did it a few more times each time becoming more and more certain of his discovery about gravity and how his body would respond.

Now, if I had followed the other parents lead and told him it was too dangerous he would not have been able to test out his theory. I would have taken away an amazing learning opportunity and he would have just carried on not knowing he has missed out.

I should put in a disclaimer of sorts about here as I have provided many opportunities for him to explore freely from as soon as he could crawl. I trust him to make good decisions but most importantly I know him. I know how he works and how he thinks. This alone made me sure that he wasn’t going to climb up on top of the half pipe and jump off the front face.

I has assessed the risks as I watched him do what he was doing and I was comfortable with his assessment. Cuts and grazes are a part of growing up and a normal part of outdoor play and that was the worst that would have happened in that situation.

So how can we as parents and teachers help encourage risk awareness with children? This will depend on the age of the child and what experiences they have had when faced with risks in the past. So, let’s start at the beginning.

5 WAYS TO SUPPORT YOUR CHILD TO ASSESS THEIR OWN RISK

Be there to spot them. What’s spotting? Spotting is a technique used to protect a climber’s head and upper body while climbing above the ground. If a child is trying something new that has the potential for a good fall – be there. This doesn’t mean you hold them and push them up if they are struggling, you are just there to protect them if they fall. With toddlers, I often place my hand just away from their hips or bottom. They are then free to use their hands and feet and feel the weight of their body while climbing or negotiating whatever they are doing. At this age, they are more likely to slip and fall rather than an older toddler or preschooler who has the motor control to slip and hold the fall. Top tip – if they aren’t sure what to do and need some help moving, instead of lifting them, start tapping their foot or hand a couple of times and say put your foot here, then tap where they need to place it.

Going one step further you can soften their fall. I use this technique so that they can still feel what happens if they let go with both hands and they start to understand what gravity does to them in those situations. If they do let go, they will feel the feeling that you get when gravity kicks in. They will also learn about risk assessment faster than if you were to hold or carry them over obstacles.

3. STEP BACK AND WATCH

As we become aware of their capabilities, and they are very capable if given the chance, then this is when we can step back and watch. Watch them explore and watch some more – from a distance. If a child can’t do something, then they aren’t going to figure it out themselves if we are there beside them pushing or pulling them along. Allow them enough time to have a good try as by stepping in too soon (or stepping in at all) we are taking away the experience of perseverance. Which brings me to the next point.

4. ALLOW THEM TO FAIL

If they can’t do something but they want too and they keep trying, you will see a wonderful determination, which is a great thing to have as a little learner. Thomas Edison once said ‘I have not failed. I have just found 9,999 ways that do not work’. They might not get it straight away in fact it might take them a few weeks or months to get it but if they are enabled to problem solve and eventually figure it out by themselves, they will be able to celebrate that wonderful feeling that is their own achievement. They wouldn’t have felt this way if they had been helped every time. This is also great for their confidence and we can help build their confidence with the next point.

Celebrate what they achieve rather than what they didn’t do. For example, if they got up to the 3rd rung on the ladder you could say ‘You got your feet onto the third rung of the ladder!’ or ‘You climbed up to the third step all by yourself!’ Positive statements like these are great for their confidence and their awareness of what exactly they have achieved.

WHEN TO STEP IN

Lastly, if they are in real danger then stop what’s happening, get them safe and then talk through it. Talk through why they think you stopped them if they can talk. If they can’t talk yet, tell them about your thinking and why you stopped them doing what they were doing. I often hear children being talked to very simply e.g. stop, that’s dangerous. If you give a full explanation e.g. ‘Sarah, I stopped you from jumping off there because it is very high and there is concrete at the bottom. If you had jumped you might have hurt yourself badly and I want to make sure you stay safe. Next time you could climb back down the ladder if you want to get down’. They may not fully understand initially but if you keep talking to them with detail you will be surprised at what they take in!

Those are a couple of ideas to think about the next time you are out and about with your little people. It’s never to early to start teaching your children about risk assessment. Do what you feel comfortable with and with what you know about your child. If you find it challenging yourself, just take it one step at a time. Some of these ideas can go against what we may have previously thought so test them out at a pace that you are happy with and remember that you can always ask us any questions on here or on our Facebook page or via PM. Have fun watching your child’s risk assessment journey!