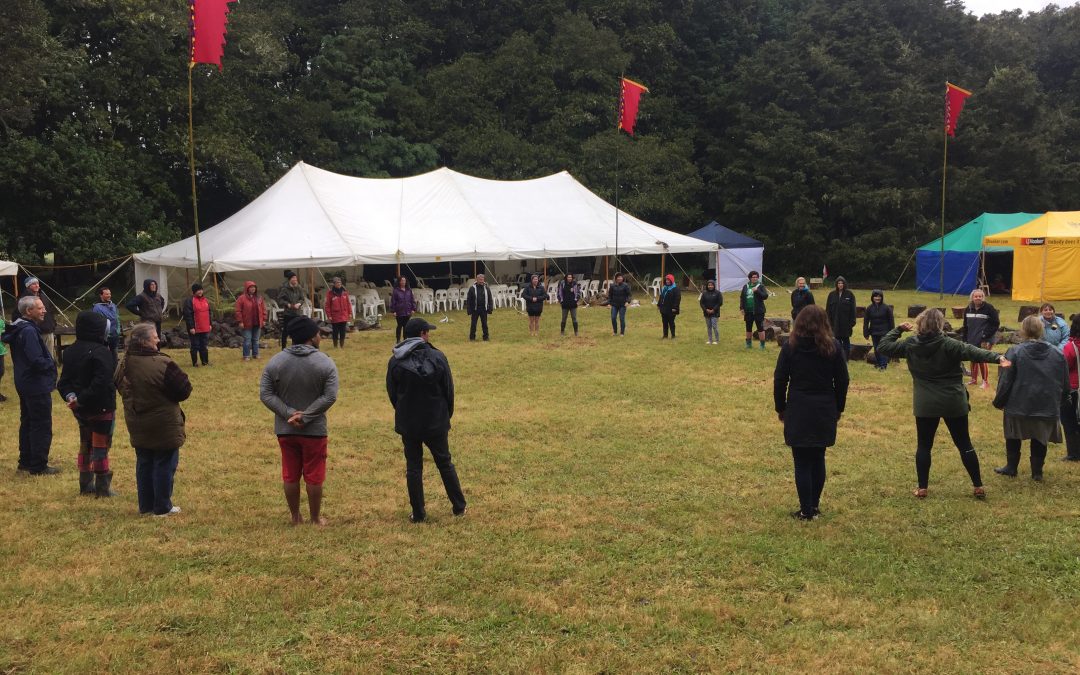 It’s hard to know where to start when describing a conference as amazing as the Natural Phenomena 2017. The conference is set in the Wild Woods near Whangarei where most participants pitch their tent and have a full immersion experience of nature and education of 3 days. I like to call it school camp for adults!

I could probably write for ever on the conference but I am going to try and sum up the speakers and workshops I attended as best as possible as well as the atmosphere. So here goes. 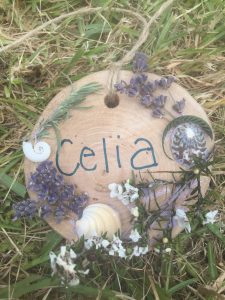 We hand made our name badges

First up was the wonderful Jackie Blunt who is a presenter for the Brainwave Trust. I can listen to anyone for hours speaking on brain development and Jackie’s talk was just the same. Jackie talked about how the brain is wired and we looked at the brain stem, cortex and limbric systems. She made a point that I hadn’t heard before about how the brain is engaged during screen time compared to unstructured free-play. Screens engage the sensory parts of the brain yet unstructured free play with engage the sensory part of the brain as well as the cognitive thinking part of the brain or the working memory. Jackie looked at how chronic severe stress impacts a developing brain which is especially important to note as during peak utero brain development brain cells are growing at 250,000 each minute!

The science that Jackie presented is wonderfully supportive of play. Play enhances the cognitive, physical, social and emotional well being of children. Play contributes to better physical health than passive entertainment. (Ginsburg, 2007). Play, particularly free, unstructured and outdoors, is essential for healthy brain and socio-emotional development and in the early years of life is far more important than direct instruction. (Frost, 1998, Szalavitz and Perry, 2010). Access to play improves classroom behaviour and acedemic performance (Pellegrini and Smith, 1998). And lastly time spent in free play fell by almost a third between 1981 and 2003 and time spent in outdoor unstructured play was halved between 1981 and 1997 (Szalvitz and Perry, 2010).

I also attended a workshop of Jackie’s on resilience where we looked at how the brain deals with different types of situations and what kinds of experiences can help support building confident and resilient kids. We looked deeper at stress on the brain and also what happens if risk assessment is removed from children. One of the key points was that a key stress in peoples life is when there is a lack of connection which is a key indicator for resilience. To sum up if there is not much risk in a person’s life they are likely to be less resilient as the brain hasn’t experienced how to deal with adversity. Resilience is the ability to deal with adverse situations and still develop cognitively. 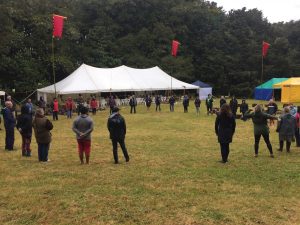 Risk activity with Tim Gill outside the main marque

Tim Gill was another fantastic speaker (they all were!). Tim’s presentation was called ‘Nothing Ventured, Balancing Risks and Benefits in Children’s Learning and Play. One of his opening sentences was ‘Sitting is the new smoking’. The conversation started around the generational change and we looked at some stories of extremes. e.g. children getting in trouble for building huts in the woods, schools banning ‘best friends’ and cartwheels being banned in schools. We all dropped our jaws at these stories as I guess the theme is that adults are taking experiences away from children which means they are not making decisions for themselves. This cotton wooling along with other things has led to the shrinking of our children’s freedom. Or as Tim put it – Increased Adult Control!

One example that Tim gave us was what happened when soft fall sponge matting was introduced – to make playgrounds safer. Ironically an Australian researcher David Eager (2008) did some research on injury rates and discovered that not only did soft fall matting not make it any safer on playgrounds, actually there was a 20% increase in injury rates!

Tim discussed  being reckless and that that is not what he is suggesting we let our children do. There is a middle ground. It’s about supporting children to take responsibility for themselves so that their brain develops in a way that leads itself to being resilient when they get older.

In Tim’s workshop he walked us through a Risk Benefit Assessment. I have always considered the benefits but I had always kept them separate to my risk management forms which meant that other people reading them might not see the list of benefits. He suggests starting with benefits and then looking at the risks and balancing them out. Do the risks outweigh the benefits or do the benefits outweigh the risks? There is your starting point and it’s a great way of getting people thinking differently about risks. I think it would be especially good if you work with people who have different thoughts on risk assessment. 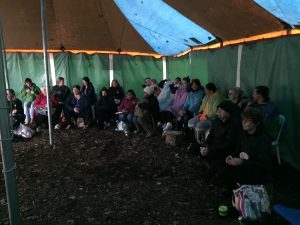 Trying to keep warm in the tent

Dr Ihirangi Heke was really interesting. As a physical education teacher originally he has been developing he thoughts over the past 7 years and it has thrown his years of work in PE on it’s head. He has written about Atua Matua (gosh I hope I have spelt that correctly!) which is written from the perspective of water. The oldest form of knowledge we have is water and the land. I don’t know if I can do his talk justice with my words as it was very deep and just covering the surface but essentially he is saying that the environment should be the main focus of education rather than the student. It challenged many people’s thinking and in fact he was surprised that no one walked out of his talk or heckled him! The theory is that there are different levels of learning and that you start at the bottom and work your way up e.g. you start with understanding what cold water is before you can understand how ice feels and how it forms (and the many steps in between).

Vicky Wilson who I remember watching on a TV documentary on kaimanawa horses. It was such a different talk and yet really inspiring. As she works with horses I wasn’t sure what the relevance was going to be but gosh it was awesome. She started with a phase ‘How do we get a child scholar to learn more and want to learn more’. She was talking about horses but it crossed straight over to humans too. Getting horses or people to be the best version of themselves is about giving them the tools and the best environment to be the best version of themselves. She was a big advocate of not telling her animals off (or children). If a horse gets something wrong then they are confused, so if you were to tell the horse off while it was confused you would crush it’s confidence. Same for people.

She said often we don’t need the correct answer we just need an answer. She teaches her horses how to look for the answer and asks am I asking questions my horse can understand? She asked a question as part of her talk and this is out of context but a great question ‘are you a home where a foster kid is going to thrive?’. Vicky also referenced Finland and pointed out something that I agree with on the whole – NZ limits growth as a country. A thought provoking talk with the cross over of the animal kingdom. 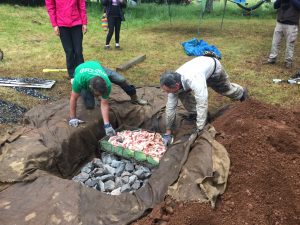 Laying down the Hangi with Mark Jones and Omine Ivatt

The last workshop I attended was with David Spragg. I was lucky enough to talk to him on the phone the week before and changed my workshop accordingly! I was not going to miss this and I am so pleased I didn’t! His topic was less is more and to be honest I am not going to be able to share all the gems of wisdom he shared but I want to share one story with you.

He started with ‘When children get bored, they get creative’. His story was something along the lines of this (sorry if I get this slightly wrong David!) It was either at a centre or a holiday programme. He asked the teachers to turn up at the same time as the children got dropped off. All the toys were packed away. When the parents dropped their children off they were surprised and asked what was going on – ‘It’s all OK and under control – see you later’. Off they went and the children and teachers sat down. They sat there for 20 minutes. One child may have asked ‘are you going to get the toys’ to which the answer was ‘no’.

After 20 minutes the children realised that the adults weren’t going to solve their problem of no toys. They were bored. And boredom develops creativity. That’s just what happened. The children started creating their own games unaided by toys, just with themselves. The amazing observation that was made is that the games they were creating were social games and they were engaging with each other.

Essentially David said get rid of the plastic and make what you need if you can. Get the children involved in it and get them creating their own environment. Plastic doesn’t stimulate their sense so why are we using so much. Yes plastic is easy, cheap and can be durable – but at what cost – our children’s imagination and creativity? 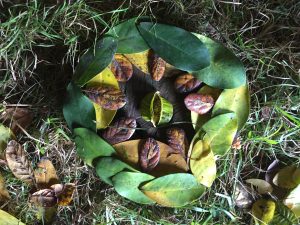 someone had created this in a previous workshop

The last couple of things I want to share are about the environment. The thing with camping there the whole time is you have an experience where you are fully present and aware the whole time. Time is not much of an issue as you wake with the sun and listen to the drum that tells you your next session is about to start. Then in the evenings we were listening to wonderful story telling with Tanya Batt around the fire pit or dancing and singing to musician Matiu Te Huki as the rain gently fell outside. 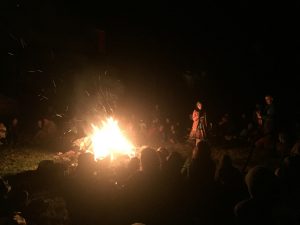 The rain reminded me of my time in Milford Sound. Steady and consistent and the pita-pata was lovely to fall asleep to at night. I can tell you though that when I pitched my trusty tent a small section of the fly unsealed itself so some remedial repairs were required in the way of duct tape and a flannel in the tent to catch the drips that came in anyway. I was thank full I didn’t end up flooded in the night. 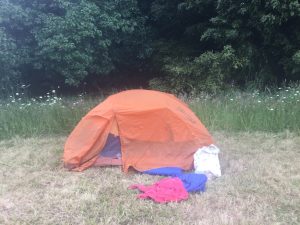 My accommodation for the weekend

The people I met there were amazing. The attendees were friendly and open and people spoke freely. Then there were the organisers who were the stars of the show. Their efforts to create this amazing atmosphere and deal with the challenges that rain created and all the other organising that went on to create the natural phenomena. And it was definitely phenomenal!